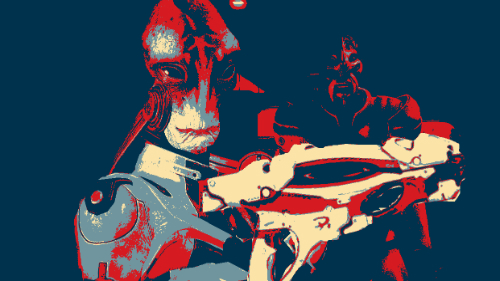 The legend of the creator of the Venom shotgun [See the Weekly solo challenges - week 6] is well known to the Salarian people. Many soldiers entering battle today engrave the name on their Venom shotgun should they be privileged enough to be granted one by the Salarian Military.

The story of the creation of the Venom shotgun is in fact a lonely one. Following the rage-induced decimation of a Cerberus unit with the incredible power of the newly conceived Venom, it's creator, a Salarian with moral integrity, realized the consequences of his actions. He knew that he must leave his homeworld, perhaps never to return.

He became one of the Lystheni, a branch of the Salarian race not welcome in Council space, banned by his own people. He needed to journey to the far reaches of space and to hide for a while. He needed to get to Omega. He would need a body guard first and foremost as he had a feeling that cerberus would be tracking him.

Note: This challenge goes out to those fans of the Mordus challenge in the Solo Challenge Thread