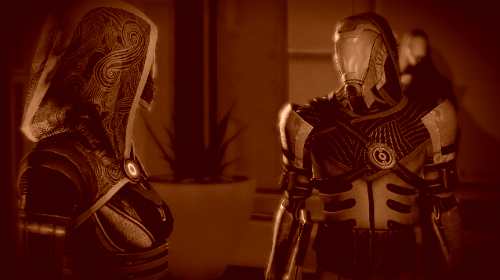 Tali'Zorah Nar Rayya and Kal'Reegar fight together on Haestrom. The remaining crew soldiers with Reegar have died. The two fight the Geth as a united front and survive long enough for support to arrive on the hostile planet, hellish planet. They are eventually joined serendipitously by Shepard and his crew, just in time to battle the Colossus.

In solo challenges, we had the chance to fight with both Tali and Kal separately. Now we can fight together, united in one of the classic battles of Quarians versus Geth in the mass effect series.

This one goes out to kaxas92.