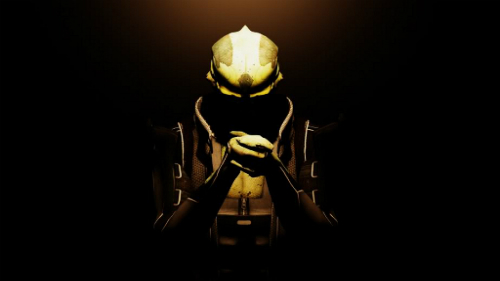 You have been summoned.

The Drell are omnivorous reptile-like humanoids. Their home planet Rakhana was dry, rocky and barren. Eight centuries ago, the already arid homeworld fell victim to a disastrous industrial expansion and a population surge upwards of eleven billion. Without the capacity for interstellar flight, the Drell were doomed to a swift descent into turmoil, complete exhaustion of resources and eventual extinction.

They were saved by the Hanar. The jellyfish-like species made first contact with the Drell in their last days. Seeing that the species was in despair, the polite, non-bipedal species rescued several hundred thousand Drell and transported them to their own planet, Kahje. Despite the disparity between climates between the water-covered Kahje and the arid Rakhana, the Drell integrated quickly into society. The remaining Drell on Rakhana perished.

The Drell have thrived co-existing with the Hanar as a part of the Galactic Civilization for almost two centuries. The depth of gratitude that the Drell owe the Hanar is known as the Compact. The Drell fulfill the compact by completing tasks that the Hanar find difficult, such as combat. While, they have a right to refuse the Compact, most Drell consider it among the greatest honors.

The Hanar are reluctant to send their soldiers to combat. They value and respect their alliance with the Drell. These are desparate times however. The Hanar have selected the three best Drell operatives of the entire Kahje military to complete the following critical tasks. The Hanar and Drell hope to honor their alliances and fight alongside the Galaxy in the greatest threat of this cycle.

The duo challenges in this series comprise two sets of the Themed Duo Challenges.

This series includes trio challenges thanks to the great success of Max Dmian's OPERATION ROLLING STONE SPECTRE challenge and frankly, because they're a ton of fun!